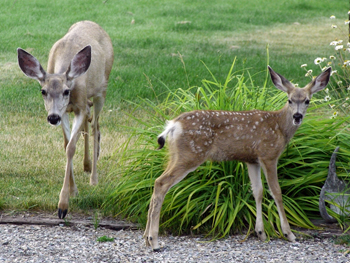 Since October 2010, the City of Cranbrook through the Urban Deer Management Advisory Committee has been working on a plan to manage the Urban Deer issue.

The City of Cranbrook recognizes that deer are a natural part of our environment and despite the fact that present mule deer numbers are considered low relative to other urban areas, anecdotal information from the public suggests that human and deer interactions in Cranbrook are increasing.

Residents continue to express growing frustration with a range of deer issues from property damage to aggression towards both pets and humans.

You will find information below about the lifecycle of mule deer, the City of Cranbrook Deer Feeding Prohibition bylaw, the diet of mule deer, information about protecting yourself and your property and a list of other great sources of material about living with deer.

The Urban Deer Committee will continue to  conduct deer counts, conduct resident surveys and monitor and report on numbers & species of deer, predator sightings, complaints, incidents of deer conflict and bylaw infractions.
To report any of these things please email us at urbandeer@cranbrook.ca or call Cranbrook City Hall at 250-426-4211.

To report wildlife-human interactions where public safety is at immediate risk, call 1-877-952-7277 (RAPP)

We are also a proud sponsor and supporter of WildSafeBC.

For more information, reports and factsheets about deer, click one of the links below.